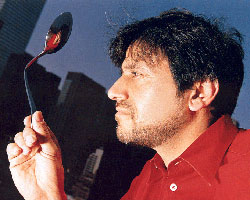 Snow is falling quietly on New York’s East 65th Street, but that doesn’t muffle the din inside hot spot Barbaluc: There, wineglasses are not only clinking, they’re bending. A tall man stands at the table of talk-show host Regis Philbin and his wife, Joy. The man asks Philbin for his fork. Moments later, it bends in half. By itself. Philbin looks on in disbelief as his wineglass encounters a similar fate. Shaking the man’s hand, he asks what many in the restaurant are silently thinking: “How did you do that?”

Gerard Senehi’s not telling, though. The secret of this and his other trademark magic feats – moving objects through the air, mindreading – remain locked inside his head. So unless you can read the 44-year-old mentalist’s mind, you’re out of luck. Which is a good thing for Senehi. Unlike traditional magicians, who employ props and sleight of hand to wring “miracles” out of thin air, mentalists – or mind magicians – use skills like hypnosis and memory as tools of their trade. Using items that clearly aren’t props, like Philbin’s wineglass or utensil, boosts the audience’s amazement factor. With magicians, the audience generally assumes the rabbit trick is, well, a trick.

“Entertainment like that doesn’t make you think, thought there’s nothing wrong with that,” explains Senehi. “But when there’s more depth, that makes it more interesting.”

Calling himself the “Experimentalist,” says Senehi seems more scientific than magical. He doesn’t use Atlantic City patter or gimmicks, either, to distract the audience from what he’s really doing; Senehi wants you to think about the tricks he does. And to question the laws of physics.

“The one question I often get is, “Is it real?” says Senehi. “People want to know if I have special powers or whether it’s just tricks. I try to maintain an element of mystery.” So much so that he won’t even say off the record whether the stuff he’s doing comes from years of practice or if he has psychic abilities. “There’s a certain intuition that I have that makes me aware of a lot of different things at the same time,” is all he’ll say.Mentalist spoon bending

Senehi discovered this ability while attending Les Mioches boarding school in Switzerland. While reading a friend’s blackjack cards, he was able to draw and accurately predict four cards in a row. “I was interested in questions I could not answer, and was fascinated by puzzles.” he remembers. “On the surface, you couldn’t figure magic out, but when you went deeper, you could.” Senehi, however, was not mechanically inclined and recalls taking watches apart but not being able to put them back together. So digging deeper took a bit more effort. Now, of course, he can alter watches mentally. One of his favorite tricks is to change the time on a watch without seeming to touch it. Born in Paris, Senehi studied in Switzerland before going off to Amherst College in western Massachusetts. After earning a B.A. in psychology and then a master’s in psychological education he spent years working as a graphic designer and a social worker. Five years ago, he visited a friend in Israel, where he decided to pursue his dream of becoming a mentalist. Senehi started by bending coins, but honed the craft so well that after two years of street performing in Israel, he returned to the United States. Today, the unmarried mentalist lives in Lenox, Massachusetts, and earns a more than respectable living performing for a wide range of events, from corporate affairs for investment banks like Merrill Lynch to top social functions on someone’s private island.

Despite his success, the somewhat reserved Senehi remains humble. “I am not an extraordinary guy,” he says, “I had a few experiences I would consider to be psychic when I was a kid, but many people have had experiences of that sort, whether it’s an event, a dream, or a vision of some kind.”

His quiet nature translates to “mysterious” onstage where Senehi usually has the audience eating out of the palm of his hand by the time he takes his last bow. In fact he often has to pry himself away from an awed crowd who poly him with countless questions about his skill. The last part is what really keeps him going, however. “I like to see people shift from disbelief to belief,” he says. Still, when the party’s over, and the last audience member has gone, he’s the guy standing a lone in the hall, seeming to blend into the scenery. If you blink, perhaps he, too, might just disappear.