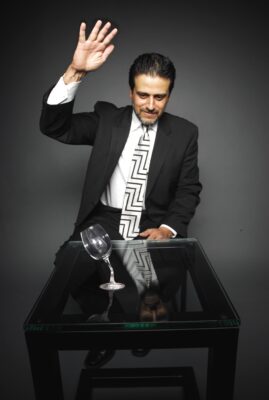 This last year we have become a planet that has learned how to connect in a different way. Only a few people had heard of Zoom and even less had ever thought about working from home until 2020. We had to disconnect from our reality.

Mankind across the world called out for a way to rewire. Bringing together this rediscovery of our thoughts and emotions was perhaps most comprehended by one man who has always understood the incredible power of the mind.

Gerard Senehi is known across the world as the Experimentalist. As a master of mentalism, he holds a coveted role that for decades has made him in demand as a motivational speaker and corporate entertainer. In a unique way he has grown this position to new heights as he has adjusted his engagements online due to pandemic.

It takes a bit of genius to create this phenomenal platform that makes it possible for him to connect with those who take part in online sessions across the world. Just a year ago he appeared in person at international conferences. Now he has mastered bringing people together over video conferencing in a way only he can do.

“I’ve always been interested in doing something that not only blows people’s minds but that also inspires and uplifts. The impact of COVID and the combination of working online, brought out new capacities for me to inspire and uplift my audience,” says Senehi about his current sessions. “It’s not very difficult to blow people away with mentalism, but to move and inspire people deeply is a whole other thing.”

The superstar mentalist uses his incredible skills to create mystery, demonstrating impossible feats that even the most ardent skeptics simply cannot explain. To witness what he does normally in a room full of hundreds attendees often blurs the line between unfathomable and profound disbelief. But, for that now to be extended to an audience thousands of miles away on a computer screen takes on a mind-blowing distinction.

Clients are continuously impressed as they watch him suspend their ideas of what’s possible, thus giving an experience that is not only thoroughly captivating, but also expands possibilities beyond imagined boundaries. Envision someone mentally willing you to stand up in front of your desk from another city, or correctly guessing where you celebrated a birthday a decade ago. These are not just magical tricks. They are a roller coaster ride that makes space to embrace the unknown.

Companies he has performed for include American Express, IBM, HBO Sports, Time Warner, The Mets, Starbucks, Coca-Cola, Emirates, Barclays Capital, Prudential, and Volvo amongst hundreds of others. They admire his great presentation as they create an atmosphere of openness and possibility, which is why he is often sought out to present as a motivational speaker for board retreats, strategy meetings and conferences for companies who are trying to push into new territory.

“Gerard was the most talked about presenter of our entire conference — and we had some of the most renowned thinkers in the world” stated Tamara Lashchyk at the Deutsche Bank Annual Conference about his incredible ability to connect.

His work is known to improve work environments over video conferencing as his phenomenal experiments bring employees together by building a new level of openness.

Senehi’s mind reading — which has impressed the likes of Bill Clinton and Hoda Kotb just to name a few — is something that leaves you not sure, but also willing to open a new dimension. In these unprecedented times, it is this quality and appreciation for team connection that is more important than ever before.

To watch his presentation right now automatically makes a group more conducive to limitless paths of productivity and creativity. Book him for private and corporate events and open up a world of possibilities.