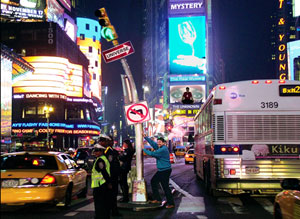 I work in one of the most cynical professions, spending the bulk of my days with crusty, hard-nosed realists who smirk at anything vaguely sentimental or, gasp, “spiritual.”  We deal with cold, hard facts, and nothing pleases us more than to catch someone in a lie.

So, as you can imagine, I have a hard time admitting to my peers that I yearn to experience something unexplainable, irrational, magical.   Indeed, I’m one of those sad cases who, at the age of 31, are still enchanted by C.S. Lewis’ “The Lion, the Witch and the Wardrobe” and those wacky Don Juan books by Carlos Casteneda.

After all this time in the humdrum “real world,” I crave something that really blows my mind.

It’s not that I haven’t looked.   I have.   But the one time I went to a psychic, she told me: “Sometimes you are happy, sometimes you are sad.   You will marry someone in business or the arts.”   Made me think maybe the cynics have a point.

So when I meet a publicist at a party who tells me about one of her clients – normally an event that makes me drop my chicken wing and run for the door – I’m all ears.   He is a “mentalist,” she says, who reads minds and bends spoons using only his concentration.

The next morning, working hard to stifle my enthusiasm, I pitch the story to my seen-it-all editor.   She rolls her eyes, but gives me the go-ahead. (That’s one perk about this job – you can meet just about anyone with the excuse that you’re doing a story.)

I meet Gerard Senehi in his sparse TriBeCa loft after work.   After a little small talk, he gets right to it, asking me to put my pen on top of my flattened palm.   He moves his hand up and down above the my hand – without touching me or the pen.   The black Bic leaps into the air, all on its own.

“That’s what everyone wants to know.” He doesn’t answer.   He never does.   Gerard, 38 – who was born in France, raised in a small Swiss town and now performs at corporate parties – won’t even tell me if it’s a simple magic trick or a true mental gift.

He then has me think of two words – I chose “act” and “eyeglasses” – and he guesses them correctly.   He guesses my husband’s name and the town where we live.   I’m floored – but, as I’m about to find out, this is the least of it.

We walk around the corner to the Italian restaurant Acappella and are seated by a grinning waiter who hovers expectantly.   Clearly, Gerard’s been here before.   We chat.   I’m dying to ask him to do more tricks, but I feel it’s rude to treat him like a performing pony.

I shouldn’t have been so shy; he’s happy to indulge.   He has me choose a wine glass off a neighboring table – to ensure it’s not a trick glass – and bring it to him.   I watch the glass slowly bend as he rubs the stem.   I can’t look away.

We approach a nearby table of three fortysomething guys in the financial industry, relaxing after day of dealing with hard numbers.

Gerard has one of them, Tom, hold his friend’s bulky key chain between his closed hands.   Gerard concentrates hard, then tells Tom to open his hands.   One of the keys, a small gold one, is bent.

“That is sick,” Tom says finally.

Gerard takes a freshly lit cigarette from a gray-haired man at the next table.   The cigarette floats by itself through the air, around Gerard’s thin body, through a ring he makes with his fingers, and lands smoothly in his mouth.

A busboy carrying a tray of dirty dishes stops in his tracks.

One of the men asks: “Do you know about people? Can you read minds?”

Can he read minds!

Gerard tells him his father’s name and the town where he lives.   “God bless you,” Mike says as we move on to the next table.   “I hope you make a billion dollars!”

I got something even more valuable.   I keep that bent glass on my desk at work, as a reminder in a sea of cold facts that some things, happily, can’t be explained.