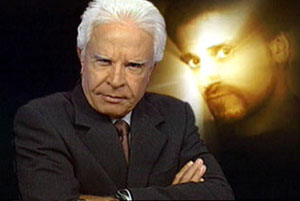 He does not mind the place or the size of the audience. One person or several hundred people – what matters is the response.

With the crew from Fantástico, he started slowly. He borrowed the reporter’s watch. Only with his mind power he turned it into a toy. He asked her to hold the watch and give him a number. “36” she says. “Ok I’ll move it ahead 36 minutes.” Said and done.

During his adolescence, he had strange experiences: “One time, I was playing cards with a friend and guessed two cards he was flipping over. On the third one, he threw the deck of cards at me and said I was cheating. It wasn’t a trick, it just happened”.

Does he do magic or use his mind powers? “I’d rather keep the mystery,” he states. The name he chose for himself: “The experimentalist” “What I do is spontaneous, it is not prepared. I borrow objects. If they were mine, people would be skeptical,” he says.

The telephone is his and follows his master’s orders. To end suspicion, he asks the reporter if she has a magazine. She does and he asks her to read a few lines to herself. Miraculously he tells her exactly what she is thinking. She looks through a book and leafs through it at will and picks a word only in her mind. She concentrates and repeats it in her mind “videotape, videotape.” “Maybe you communicate better through images” he says and starts drawing. He has some fun and apologizes: “I’m not an artist”. But gets the word right…

He loves reading other peoples’ minds… But don’t people get scared? “Some get terrified, it’s scary to think that someone can read your mind,” he answers. He proposes one last test. “Make any drawing on a piece of paper,” he says. She makes a basic drawing of a man and gives him a name. “You drew a man – a stick figure, and he is wearing long pants. His arms are rounded. You also wrote something next to him that I can’t make out.” he says. Incredible, he scribbles something in the same position as the name I had written. For the experimentalist, the important thing is to take people on a ride, which he once again manages with this reporter…

In the streets Gerard asks a woman to light up a cigarette. “This is my favorite part”, says the magician. He makes the cigarette levitate! It’s a defiance of the laws of physics!

Gravity is a word that does not exist in this man’s vocabulary. What is he going to do now?

Gerard asks: “Can you feel the energy?” Objects move around under this powerful mind’s command. It’s mind over matter.

“Congratulations, Gerard! You have been successful and have stunned people! We have never seen anything like it.”